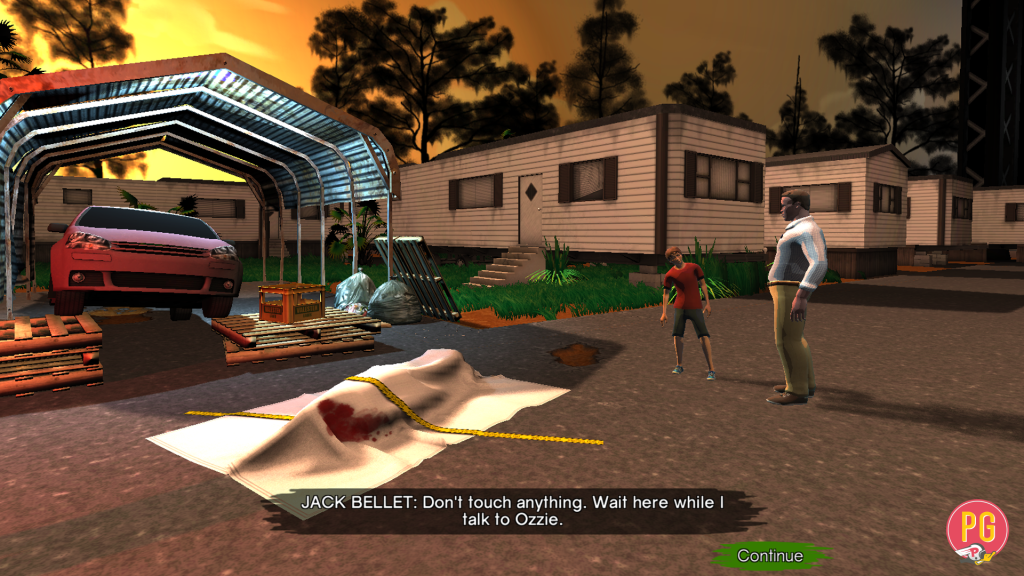 It suggests that if you’re determined to press on with something foolhardy you’ll probably not do well out of it, a warning which the protagonists of Knee Deep do not heed (the other two I made up). It’s a perfect example of Knee Deep’s shtick though: snappy, folksy writing. Witticisms that aren’t really accurate but definitely sound meaningful. Artificial, in the sense that for the most part people don’t actually talk in real life like they do in Knee Deep.

It works in context because Knee Deep is painted as being entirely artificial anyway. It’s a murder mystery melodrama with a distinctly Twin Peaksian flare to it, and you control the characters unwittingly at the heart of it, all three of whom end up investigating the apparent suicide of an actor in Cyprus Knee, a Florida backwater, completely coincidentally. You follow Romana (a gossip blogger characterises as odd and/or quirky), Jack (a middle aged local newshound), and K.C. Gaddis (washed up private detective) in turns as they pull on different threads of a huge conspiracy. And the entire thing is a play.

It takes place on a stage that rotates through different sets, over three distinct acts that each have a lead in scene (when it first came out on PC last year these were released episodically). The walls of buildings slide apart, characters are spotlighted, text messages they receive are projected on screens behind them, and everyone frequently breaks the fourth wall, or speaks in rhyming couplets. You can see silhouettes of the actors moving to hit their marks when the lights are down, and when shocking or exciting things happen the audience gasps. It’s pretty fucking cool, to be honest.

It works with the sad inevitability of the story. You can choose slightly different paths through the play, but there’s no way to hammer out a really happy ending: you’re told at the start you can’t lose the game, but you can’t win it either. This makes perfect sense when you think of it as a performance that the actors learn and reproduce night after night, possibly including matinees as well. As a game it’s a bit of a hindrance because it’s not especially interactive — in fact the mini-game puzzles you come across, most likely there to vary the game up, end up feeling out of place and crowbarred in when compared with the rest of it.

It’s slightly mis-sold because while Knee Deep is technically a mystery you don’t really end up solving it, per se. You’re instead party to the complex melodrama playing out between the three different sleuths and the cast of odd characters: the councilman on the take with a strange vocabulary, the swamp recluse whose baby was eaten by an alligator; Remy, who runs the diner and the store simultaneously, and always refers to himself in the third person. It works much better if you treat it like it actually is a play, albeit one with camera zooms, rather than a game.

This is okay because it’s a bloody good story, at least to start with. It’s consciously odd, steeped in the humid discomfort that small towns have, and the constant feeling that you’re being watched and judged, both by the characters on stage and the audience at the same time. It does rather lose it’s way in the third act, though, veering from unsettling Southern Gothic swamp drama to a disappointing weird science conclusion, but the way it’s presented is so novel that your attention rarely wanders. It would be fantastic to see another game made in the same way with a different story. The new Telltale serial, in the largest theatre never built.

It’s improbably gigantic, filled with moving parts, fire, smoke, and water, but this is exactly the sort of shit theatre people do when they can get away with it. The last time I went to a play it rained and a house collapsed, both inside on the stage, there’s a huge outdoor opera stage in Austria that appears to spend each passing year trying to outdo itself with things like a stage that is a giant book being read by death, and the original Globe Theatre burnt down because in 1613 they reproduced the sound effect of firing a canon by firing an actual canon. Knee Deep is following a time honoured tradition of incredibly grandiose melodrama, and it works surprisingly well in a video game.