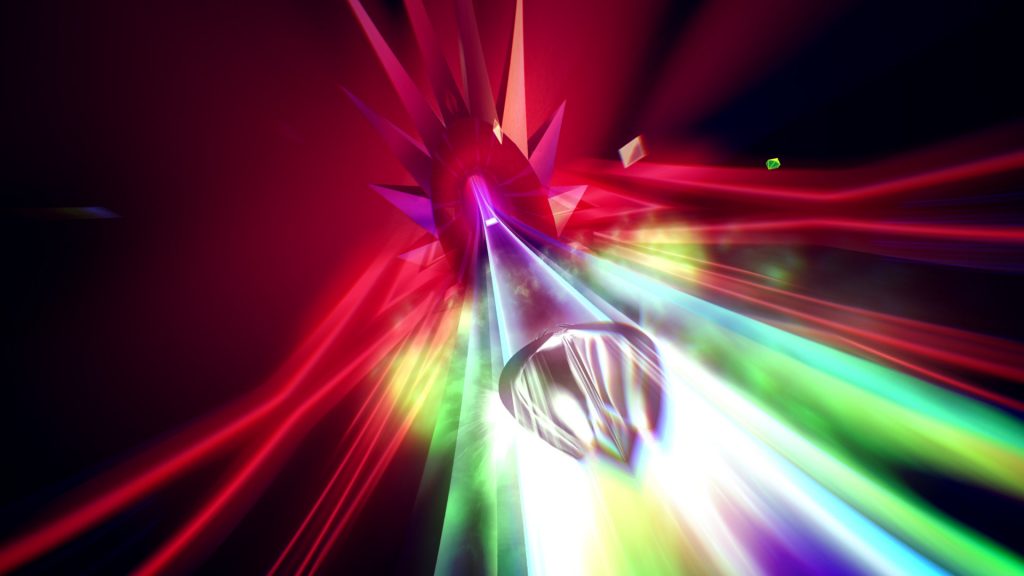 I do not understand Thumper, but I like Thumper

I have no idea what Thumper is, which is to say that on a basic level I know it’s self described as a rhythm violence game that’s a bit like things like Rez and so on, on rails which fly through a vaguely geometric, sort-of-a-bit-like-space-maybe backdrop, and my job as the player is to respond to the obstacles placed on the rails in the way the game has trained me to (smash through, jump over, grind past, etc.), and that I really enjoy it. In a more theoretical sense I have no idea. Thumper makes me think of the extremely proactive bunny from Bambi, but in this game you appear to be a beetle…?

Sorry, space beetle. It’s a space beetle. It’s a bit like a weaponised breeding experiment between a scarab beetle (the ones the Ancient Egyptians worshipped because a God rolling the sun across the sky was seen as analogous to a beetle rolling balls of dung, which is a comparison that I for one am fully on board with) and an aerodynamic bicycle helmet. I don’t mean this to sound demeaning because I like the little beetle. It’s very small and evidently on a huge journey. It has to turn and grind away from walls, because apparently its bottom, or beetley equivalent thereof, is sharper or more heavily armoured than the rest of it. It’s incredibly shiny, and vibrates a bit when it’s going really fast: an angry piece of costume jewelry speeding through what the Thumper website describes as ‘the hellish void’.

In games like this you don’t really need a premise, you just need nice visuals and a successful set of controls and gameplay, which is fine. Thumper has that. I’m more than happy to go along with it. Jump, grind, smash, fly a bit, defeat weird geometric tentacled amoeba thing waving around menacingly in front of the track. Lovely stuff. And then there’s the giant head.

The end boss for each stage in the game is a giant head — or ‘maniacal giant head from the future’ — which gets progressively bedazzled with spiky mirrored armour each time it turns up. The track the beetle is on is running into its gaping mouth. It was a shock the first time it arrived because until then I’d assumed the whole thing was going to be skidding into things by being a fraction of a second out with my timing, and otherwise watching the abstract, colourful visuals zipping past. Yet there, in the middle of the screen, was a gargantuan head. Definitely a head. With eyes and everything. Nothing abstract about it.

The difficulty for me here is that while I’m more than happy to leave things without any kind of narrative when there clearly doesn’t need to be, but with Thumper I am also being presented with a giant head that fits in some kind of narrative with a space beetle. The head is maniacal, after all, which immediately suggests some kind of personality or background to me. The appearance of the head caused an explosion of questions, which blossomed thematically in my own head (segues like this are why I get paid the medium bucks).

Does ‘Thumper’ refer to the beetle, or the head, or the music? If this is a head from the future is it from our future, or from the beetle’s future, or are the beetle and the head both in the future together? And if either of the final two are the case, why has the head travelled back in the first place? Or is it the case that the beetle has travelled forward? Did it have access to a time machine? Do beetles at some point evolve a superior and enhanced technological civilisation that outstrips humanity? While we’re at it, why is the head maniacal? Did it always used to be a disembodied head or did it used to have a body? Did it have a family of other heads? What happened to them? Did the beetle’s advanced society fail to save them from an extinction event that only the beetles knew how to prevent? Is that why it’s come to destroy the apparently innocent beetle? Is Thumper therefore essentially just a retelling of J.J Abram’s Star Trek? There is a lot of lens flare, now I come to think of it…

My other theory, and is the image that flashed up in my mind immediately upon seeing the head, is that the whole game is a metaphor for when a bug flies into your mouth and you don’t want it to, but from the bug’s point of view. I feel both these theories hold equal potential to be correct. Human’s try and find connections when you give them handholds (or brain-thoughts equivalent, possibly mindholds) and sometimes it’s better to avoid the distraction altogether. Because the truth of course is that the devs probably just thought a giant head with burning eyes looked totally fucking radical.

It kind of does, to be fair. 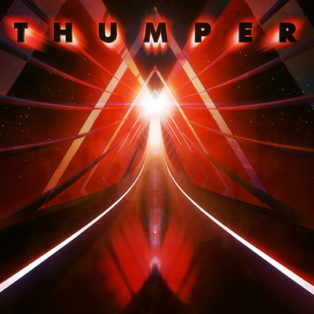