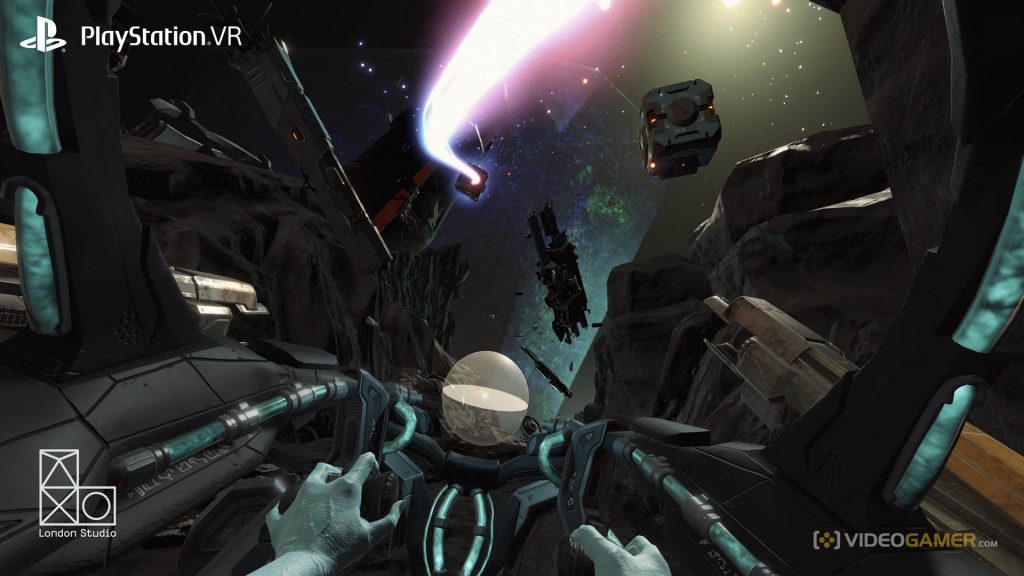 Scavengers Odyssey is an intense first-person shooter experience that sees you piloting a mechsuit, jumping across floating space rocks and clearing out an infested alien ship of space bugs. It’s the only mini-game included on the disc that is described as featuring ‘360 degree movement’, which, as that would imply, means there’s a significantly higher risk of nausea.

Standard movement is no different to any other cockpit-controlled VR game. However, each time you jump, the game automatically rotates you to land flat on the landing area, spinning the camera mid-air to adjust for the rotation. The combination of leaping and rotating is disorienting at the best of times but, as I discovered shortly after gulping down my lunch, overwhelmingly nauseating after eating.

Though marginally uncomfortable from the start, the space jumping gradually led to an unbearable feeling of sickness, forcing me to remove the headset after about 15 minutes of play. It’s the first time I’ve ever felt any major sense of discomfort during VR, and a sensation that I imagine could put beginners off the tech immediately. And I think Sony knows it. At the beginning of each chapter (all of which are spaced roughly 5-10 minutes apart), a prompt reminds you that you’re able to pause the game by pushing Options. And if you’re feeling queasy, don’t risk it: there’s no shame in taking a break.

So let that be a warning to those of you picking up a PlayStation VR next week: don’t eat and VR. And if you have to, maybe select something slightly less intense than a fully-rotational first-person space shooter.