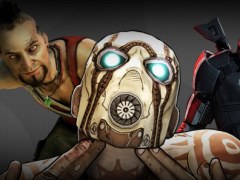 Community Game of the Year 2012

Christmas is coming and I am getting fat, which is why I have promised to finally go on a diet in 2013 and run off some of those excess calories. But December 25 isn’t a time for weight concerns, oh no, and there’s absolutely no time for not popping in another Celebration (not the Bounty ones though, thank you) alongside those adorable party hats, awkward television specials and an abundance of dried fruits soaked in enough alcohol to be firelighters. This (Christmas) is a special time for cherished traditions and celebrations.

To which I must pose this question: what cherished tradition is more worthy of celebrating than the good old list feature?

Which leads me to you, dear VideoGamer.com community. The magnificent third annual VideoGamer.com Community Game of the Year award is when our snazzy, sexy and sanguine community votes to crown the totally very best game they’ve ever played in the history of their entire lives for that year. It’s one of my absolute favourite features, and I take great pleasure in announcing what game will join the illustrious likes of Portal 2 and Red Dead Redemption.

“But Martin,” you no doubt ask, “what about the list?” Okay, great question. After a much-needed Excel refresher course, I consolidated all the votes into a numerical list. This year 56 games were nominated in total, which is considerably down from last year’s 75 – is that related to my hunch that people are playing fewer games? There’s also plenty of surprises in the list itself, with Max Payne 3 only managing 40th place, the 9/10 Need for Speed: Most Wanted languishing even further down at 52 and perennial office favourite Trials Evolution landing face-first at 29.

I can see that look in your eyes – you want to know more about the list, right? But before we get to that, I think it’s even more surprising that plenty of high-profile games – like Hitman: Absolution, ZombiU and Resident Evil 6 – didn’t receive a single nomination.

As always, the VideoGamer.com community is the pearl of the entire site – thank you all so much for choosing to spend your time with us. Anyway, enough chat. I think I’m supposed to be doing something related to some kind of list!

What Nick said in his 7/10 Amazing Spider-Man review: “This is a perfectly pleasant title, but if you stack The Amazing Spider-Man up against the rest of its genre – such as inFamous, Prototype and Batman: Arkham City – the webslinger’s latest outing starts to feel rather thin.”

What Altaranga said: “Not amazing, but a lot of fun.”

What Jon said in his 9/10 Forza Horizon review: “Forza Horizon is a driving game that shoehorns the tried and tested Turn 10 physics model into a compact section of open American roads, and what a game it is. Within seconds of booting up the game you’re dropped onto the streets, hurtling towards the bright lights and thumping bass of the festival site, as a choon blasts out of the radio and the DJs chunter excitedly about this apparently life-changing event.”

What Pblive said: “I wasn’t sure whether I’d like the idea of taking Forza out of its comfort zone and sticking it in an open-world map style game but it turned out to be a breath of fresh air. All the best bits of customisation and mirroring Autolog with the speedcamera and time trial multiplayer made it great fun without worrying about who was online at the same time as me.”

What Chris said in his 9/10 Journey review: “Here is an immaculately constructed, expertly choreographed experience that tells a story in a unique, intelligent way, exploring themes of faith and fate, death and rebirth with a rare delicacy of touch.”

What Pblive said: “Part of Journey’s charm is in the emotional aspects of the game. Unlike Telltale’s game, though, the story is left ambiguous so the player is left to interpret the game their own way. It’s an odd sort of game that you can happy rant about but at the same time are kept from saying much so that it doesn’t spoil it for other potential players.”

What Jon said in his 8/10 Sleeping Dogs review: “Sleeping Dogs may not offer anything particularly new and certainly nothing groundbreaking, but what it does do is deliver sharp, thrilling and just downright enjoyable action to savour.”

What FantasyMeister said: “Amazing Grand Theft Auto vibe from Square Enix, no less. Unfortunately it didn’t have the sheer variety of things to do or ways to inflict serious mayhem as a GTA title, so got very samey quite quickly.”

What Jon said in his 7/10 Spec Ops: The Line review: “Yager should be admired for its bravery and effort in building something different – this could so easily have been an entirely generic shooter – but it just doesn’t have the fundamentals to back up its grand ideas or the confidence to go completely off the wall and truly stand out from the crowd.”

What Dudester said: “I wasn’t expecting much from this, but if you want to play Gears without the annoying Gears characters then play this! The actual story is pretty good and certainly not what I was expecting at all.”

What Chris said in his 9/10 XCOM: Enemy Unknown review: “XCOM works best as a panic management simulator. It’s about controlling the terror levels of the countries you need money from, calming the alarm of your squad members as their leader is killed and their behaviour grows erratic and your own fears as you try to remain level-headed in the face of a terrified populace, a concerned council, and the sharp, poisonous appendages of a trio of chittering creatures advancing towards your wounded sergeant.”

What MintyRebel says: “I didn’t quite know what to expect from this game. Good reviews forced my hand into making me pick it up, and I can honestly say I haven’t looked back. I mean, sure, it has some serious line-of-sight issues, and sure Sargent Gaston was viciously shot down by the alien menace, but who cares when you’re having fun.

XCOM is just one of those games where you can tell your friends on Monday morning that they successfully saved the Earth, unless you’re Martin and died like a little pansy…”

What Sam said in his 9/10 review of The Walking Dead’s final chapter: “Lee Everett has been a blank canvas shaped into a character, while Clementine has been dutifully waiting on your every word. And whatever choices you made along the way, Telltale’s Walking Dead is one of the year’s best games, even when it forgets to hand over the controller and let you have a turn.”

What Chris said in his 8/10 Mass Effect 3 review: “There’s little here to convert non-believers, but then this game is not for them. This is one for the fans, and few who buy it will be left unsatisfied by how the story – their story – ends.”

What Grammatron said: “Forget the gripes about the ending – the whole game is one long, heaving beast of an ending. It maintains the brilliant contrast between jaw-dropping scale and personal intimacy that Mass Effect games do so well, and builds on the series already impeccable standards of acting and narrative. I was genuinely moved by the time the credits rolled, something I can’t really say about any other game.”

What Rbevanx said: “C’mon this game and the series was good fun, who cares that the ending was rubbish and stupid? This game had great moments, but I never expected the multiplayer to work for Mass Effect – it was incredibly addictive trying to get all the weapon upgrades and powers.”

What Nick said in his 9/10 Far Cry 3 review: “Far Cry 3 shines in its campaign, which is more layered and compelling than any game proffering a power trip through escapist ultraviolence has any right to be. You could dismiss it all as offensive macho garbage, sure, but you could also read it as a unblinking look at the primal appeal of becoming capable at dishing out violence and how the confidence this confers can both attract and repel others.”

What MintyRebel said: “Far Cry 3 is the epitome of what I want an open world shooter to be, Fun. (Please notice the capital F). I mean, sure, the story sucks, yes the coop is poor, and the multiplayer just feels like the generic Call of Duty clone we’re used to, but the open world exploration is just perfect, and I think the developers knew that.”

What Altaranga said: “Well blow me down and call me Shirley. You wait for months for a decent FPS and then two come along at once. Blops 2 was my antidote to the Battlefield 3 server issues. Far Cry 3 was my antidote to the whole FPS genre. For a long time I’ve struggled with the rigid, on-rails nature of FPS campaigns and wanted something else. Other FPS RPGs have either been too RPG or not enough open world, but this one is the perfect blend.”

I remember playing Borderlands 2, after not thinking too much about the original, and after about two or three hours I realised I was looking at something really quite spectacular. You guys obviously feel the same way, because Borderlands 2 won the Community Game of the Year vote by a considerable margin – this was the clear winner, which is quite an accomplishment when you look at what it’s gone up against. While the collective VideoGamer.com community has always had a soft spot for the series, if you’d had suggested this to me at the start of 2012 that Borderlands 2 would trump all competition I would have probably tried to laugh and scoff at the same time. I can only imagine how hideous such a face would have looked.

In my 9/10 Borderlands 2 review I said “on paper, this sequel reads much the same as the original. But it’s not – it’s a vastly superior game with a sharper focus, better quests and more enjoyable blasting. Borderlands 2 is a gamer’s game, so if you like shooting things, levelling up and exploring every cubby hole across a massive, varied world – if you love games, basically – then it’s definitely for you.”

Anyway, Borderlands 2 is definitely for me, and the absolute stand-out highlight of this massive game was Anthony Burch’s phenomenal script. But what do you guys think?

Neon-Soldier32: “Borderlands is my GOTY because not only does it have tonnes of personality, humour and likeable characters, it’s just damn fun! People may describe FPS’ as ‘just shooting people’ but Borderlands 2 shows people that there is nothing wrong with that – especially when you have characters as great as Handsome Jack.”

Clockpunk: “Claptrap. Check. Gearbox. Check. More guns. Check. More of the fantastic gameplay that made BL1 so good. Check. That is all that is needed, if we’re honest!”

Dudester: “Looty heaven. Not much more needs to be said really.”

FantasyMeister: “Pure unadulterated Borderlands, and the only IP for which I wonder what the DLC will be in advance. Still the only FPSRPG with Diablo-esque drop tables, and therefore still the best.”