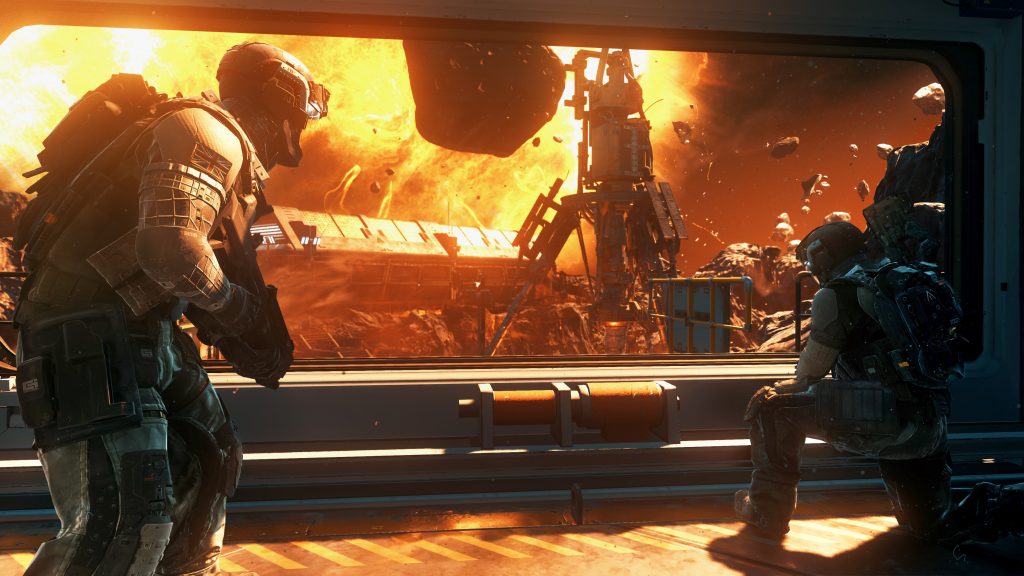 Call of Duty: Infinite Warfare is a difficult game to score

I’ve said a lot of great things about Infinite Warfare – I think it’s up there with the very best of what shooters have to offer this year, with its fantastic multiplayer and excellent single-player campaign signalling a stunning return to form for Infinity Ward. But despite such high praise, I’ve struggled to settle on a score.

Here’s the problem: On the one hand Infinite Warfare is a fantastic multiplayer shooter, exactly on the level you’d expect a modern Call of Duty to be. Its gunplay is terrific, its systems work well, and, well… it’s just very Call of Duty. But on the other, that familiarity poses an issue. Some fans may be looking for a game a little fresher than an extension on the one they got last year – and don’t be mistaken, Infinite Warfare’s multiplayer is very much extension rather than innovation, borrowing from its predecessor far more heavily than most previous Call of Dutys, if you can imagine such a thing.

It copies Black Ops 3’s wall-running movement system, Pick Ten loadouts and Specialists (or Combat Rigs, as Infinity Ward calls them here) to deliver a near identical, yet still excellent multiplayer experience. And when you first pick up and play Infinite Warfare’s multiplayer, you can’t help but get the sense that Infinity Ward has played it safe. Some (and there will be some) may even call it lazy. There is nothing here (besides the setting) that makes it its own.

But to play devil’s advocate, why fix something that isn’t broken? Black Ops 3’s multiplayer was the franchise’s strongest in years, so it’s little surprise to see it brought back into play here. Should a great game be marked down simply because it relies on ideas its previous entry was praised for? Or is it fair to expect some sort of innovation, even at the risk of delivering a weaker experience? That’s a question I’ve been asking myself all week. I’m still not sure if there’s a right or wrong answer.

Innovation has come in the single-player, however, where it’s clear that the majority of the developer’s time and efforts have been placed. Infinite Warfare’s campaign is remarkable – the best since Modern Warfare 3’s, laced with (literally) out-of-this-world set pieces and a narrative that makes a formidable, believable use of its sci-fi setting. Being the commander of a space carrier is cool – Mass Effect-like cool – and while it isn’t clever in its level design the same way Titanfall 2 is, it’s still hugely entertaining. And let’s not forget: Black Ops 3 may have had an excellent multiplayer, but its campaign was absolute garbage.

And then there’s Zombies, an element of the modern Call of Duty package that has never particularly clicked with me, but is significantly more appealing here. The cosmic 80s theme park and Teen America characters are much lighter in tone and, in turn, more fun to play. It does a far better job of introducing newcomers than previous games, too, with optional prompts offering a vague explanation of how everything functions. I actually enjoyed playing it, something I’m not sure I’d have said in games gone by.

But with everything said and done, it still comes back to that sense of familiarity. Infinite Warfare is another excellent entry in the series – its campaign is COD’s best in half a decade – but multiplayer fans exhausted by Black Ops 3’s playstyle won’t find anything notably different here. It’s great – I can see myself playing it for months to come – but it is just Call of Duty with a fresh lick of paint, and with competition as stiff as it is, no one could blame you for sitting this year’s game out. But to do so would be to miss out on one of the finest Call of Duty campaigns yet, and an online multiplayer that stands up with the best of them.