Who Is On The Across The Spider-Verse Poster? 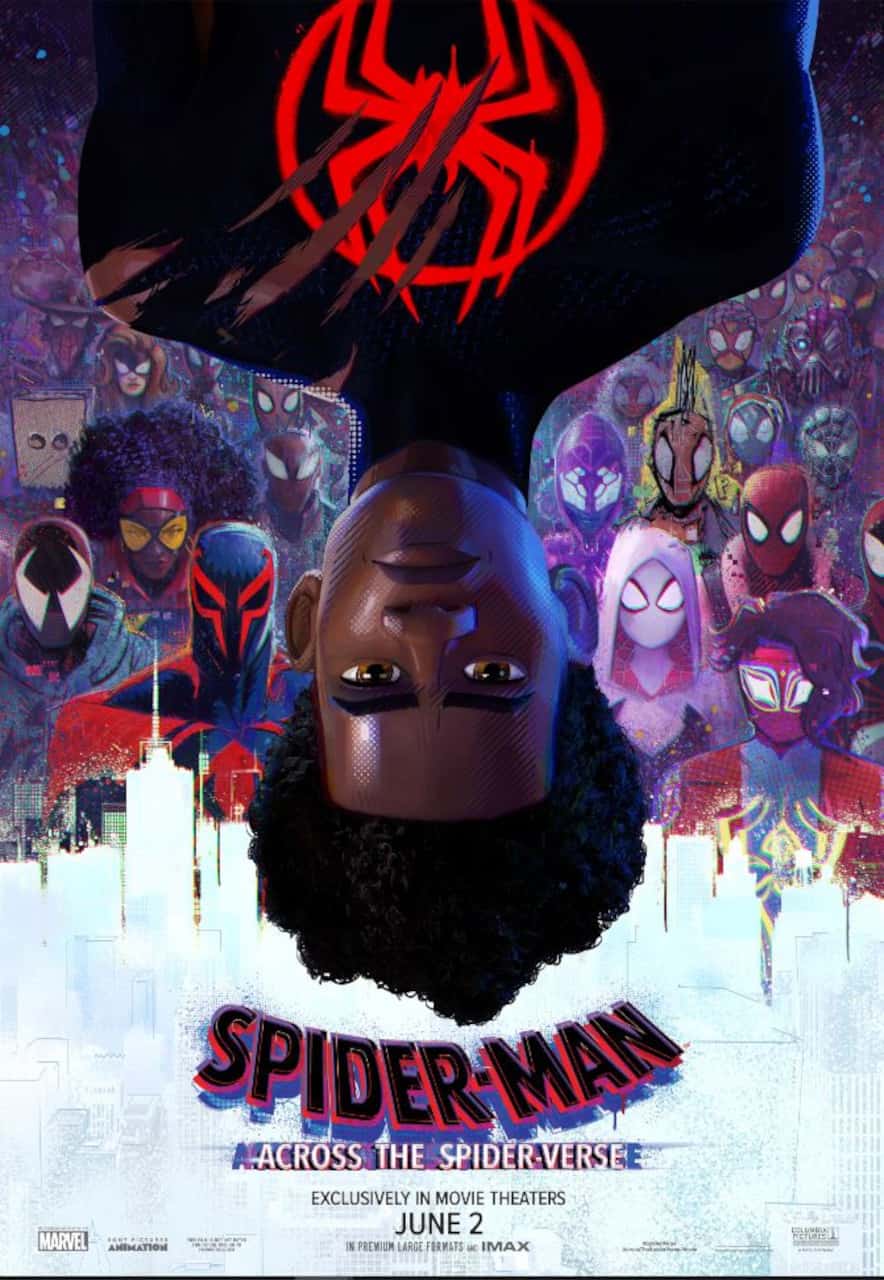 And now that the door to the Spider-Verse has been opened, Across the Spider-Verse looks set to blow it right off its hinges. Promising, literally, dozens of Spider characters from across 60 years worth of comics, animation, live action, and video games.

Let’s take a look at some of the characters being teased on the movie’s latest poster and discuss just who exactly each character is.

Who are all those characters on the Across the Spider-Verse poster?

So, to kick us off, here’s a reminder of what the new poster looks like:

Now, working from left to right, bottom to top, let’s begin with this face, who will be all too familiar to anyone who grew up reading comics in the 1990’s.

Benjamin “Ben” Reilly (the Ben comes from Uncle Ben, and the Reilly is Aunt May’s maiden name) is a clone of Peter Parker, created by the nefarious Professor Miles Warren aka The Jackal.

It was later revealed that Ben was indeed the clone (said to be a list minute story change by Marvel Creative who had originally intended to reveal that Peter was in fact a clone).

With this reveal, Ben dyed his hair blonde to distinguish himself from Peter, and took on the superhero identity, The Scarlet Spider, serving as a superhero in his own right with his own identity.

Created initially as part of the “Marvel 2099” line of comics which imagined a dystopian cyber punk future where the corporations rule the world and the heroes are now nothing more than legends.

Spider-Man 2099 told the story of Miguel O’Hara, a brilliant scientist, betrayed by the very people he worked for. As they drugged him with a highly addictive drug that only they could legally sell, in order to ensure Miguel’s debt to them.

But Miguel, a brilliant geneticist, snuck into the lab late one night in order to try and rewrite his genetic code to remove the addiction from his DNA. However, he was discovered and the equipment sabotaged, causing his DNA to be rewritten to be 50% Spider based. A result of experiments he had been conducting previously to replicate the powers of the legendary Spider-Man of the 20th century.

Now a hunted fugitive, Miguel fought to survive, and seek revenge for what was done to him, and in so doing, had his eyes opened to the suffering of the less fortunate of his home of Nueva York (future New York).

This leads Miguel to embrace his new identity as Spider-Man vowing to fight back against the mega corporations that rule his city and persecute his people.

Spider-Man: Into the Spider-Verse
Buy on Amazon
Bestseller No. 2

Spider-Verse
Buy on Amazon
SaleBestseller No. 3

Spider-Man: Into the Spider-Verse (Bonus Content)
Buy on Amazon
Bestseller No. 5

Videogamer.com is reader-supported. When you buy through links on our site, we may earn an affiliate commission. Learn more / Images from Amazon Product Advertising API / Last updated on 2023-01-19

Debuting in 2004 and running for 4 issues, Spider-Man: India was a re-imagining of the Spider-Man comics aimed specifically at Indian comic readers, As the story used many of the familiar story concepts from the main Spider-Man comics, but adapted these to incorporate Indian mythology and culture,

Such as having Pavitr receiving his powers from a Yogi instead of from the bite of a genetically modified spider. In addition, Pavitr’s enemy Nalin Oberoi (Spider-Man: India‘s reimagining of classic Spider-Man villain, Norman Osborn aka The Green Goblin), gets his power not from a serum, but after he is possessed by an ancient demon.

However, this short run was not the last that fans would see of Spider-Man: India as the character has appeared in several of the main line Spider-Man comics since his debut.

As seen in the latest trailer and now this latest poster for Spider-Man: Across the Spider-Verse, this appears to be alternate universe version of the Jessica Drew/Spider-Woman that many fans are familiar with.

However, all of Jessica’s costume hallmarks are still clear to see, with her trademark red and gold costume design.

Debuting in Marvel Comics in 1976, Jessica is one of the most recognisable and iconic of Marvel’s heroes, having served as a superhero, an Avenger, and an Agent of S.H.I.E.L.D. in her time.

Her likeness was also famously stolen by the Skrull Empress, Veranke, who spent years posing as Jessica, preparing the way for her “Secret Invasion” of the Skrulls. With several key Marvel heroes of the time such as Jessica, Hank Pym aka Ant-Man/Giant-Man, Captain Marvel, and Black Bolt, all revealed as Skrull sleeper agents.

Hailing from a universe where she was the one bitten by the radioactive spider instead of Peter Parker. Initially only focused on maintaining her newfound fame, Gwen’s life was irrevocably changed when one of her classmates, Peter Parker, who was the subject of constant bullying and abuse, sought a way to end his torment.

Parker, who idolised Spider-Woman aka Gwen, sought to follow in his hero’s footsteps, and began experimenting on himself in order to become stronger and fight back. However, these experiments only served to turn Peter into a monstrous lizard like creature.

In a fight to stop the now Lizard Peter, Gwen didn’t hold back in the use of her strength, beating Parker severely, despite his pleas for her to stop. This beating led to him reverting back to his human form, where, held in Gwen’s arms, he died from the injuries she inflicted on him.

This event taught Gwen the lesson so important to the Spider-Man mythos, that “With great power, comes great responsibility“. From that day on, Gwen dedicated herself to being better and stopping crime where ever she found it.

She has since crossed universes into the main Marvel Comics timeline and has become, as Ghost-Spider, one of the worlds key heroes and an important ally to Miles, Peter, and the other Marvel heroes.

So, I have to put my hands up here, as truthfully, I don’t recognise this particular webhead. I’ve tried searching for them online but can’t seem to find any indication as to who they may be.

I do have a tickling at the back of my brain that classic Spider-Man villain, Kraven The Hunter, may have donned the webs at one point, but I can’t find anything to confirm that either.

So, for now, I’ve taken to calling them “Fur Coat Spider-Man”.

Of course, as soon as I know who they are, I will update the article with their actual identity.

Ah, thankfully, here is a Spider character that I do recognise. As this appears to be Peter Parker/Spider-Man from 1999’s 13 episode Spider-Man: Unlimited animated series. Which saw Peter travel to “Counter-Earth” in search of astronaut, John Jameson (the son of Daily Bugle editor, JJ Jonah, and also the Man-Wolf).

As Jameson’s initial flight to Counter Earth was attacked by the symbiotes Venom and Carnage, who Peter would later discover had arrived on Counter-Earth as well.

Utilising a new nano technology suit created for him by Reed Richards aka The Fantastic Four‘s Mister Fantastic. Peter would join John in helping the human led resistance fight back against The High Evolutionary’s Bestials who served as Counter-Earth’s brutal ruling class.

Peter Parker aka The Bombastic Bag-Man

This, believe it or not, is another iconic look from Spider-Man history as it comes from 1984’s The Amazing Spider-Man Vol. 1 #258. Where, following the events of the Secret Wars event where Peter first gets his black/symbiote costume (which would famously create Venom when the suit bonded with Eddie Brock).

Peter, concerned at how little he knows about the costume, goes to the Baxter Building, the Fantastic Four‘s home, in order to take Reed Richards/Mister Fantastic up on his offer to examine the suit further.

However, with nothing else to wear (the suit could simulate street clothes as well, so Peter took to just wearing the suit as both Peter Parker and Spider-Man). Peter reminds Reed and his brother in law Johnny Storm aka The Human Torch, that he still has a secret identity to protect.

So, as a hasty solution, and as somewhat of a joke on his old friend. Johnny gives Peter one of his old costumes along with a paper bag for him to cover his face while he makes his way back to his apartment.

And thus, The Bombastic Bag-Man, was born, becoming a staple alternate costume of many of the modern Spider-Man video games.

This is, admittedly, a best guess scenario. As the mask design, and high collar, lead me to believe this is the older, anti-hero, Peter Parker of Earth-312500.

On that Earth, Peter became more unforgiving of his enemies, as he begins by killing old foe, Kraven The Hunter, in retaliation for the deaths at Kraven’s hands of Kaine (another clone of Peter) and Mattie Franklin (the 3rd Spider-Woman).

Following this choice, he became darker and more dangerous, more anti-hero than hero. Leading him to kill Doctor Octopus using one of his own mechanical tentacles.

If this is not who this is on the poster, then the only other choice I can think off, based on the metallic look of the costume, is that it is a version of Peter wearing his MK-III Spider-Armour from 2012’s Amazing Spider-Man Vol 1 #682.

First appearing in 2018’s Vault of Spiders #1 as part of the “Spider-Geddon” comic event. Margo hails from a universe where the human population spends most of their time connected to cyberspace.

Wishing to help her community by stopping crime in the cyberspace. Margo took on a new digital identity as the masked vigilante, Spider-Byte.

Bitten by a spider irradiated by illegal waste dumping on his home earth, Hobie as Spider-Punk led a revolution to stand up against the forces of his earth’s corrupt leader, President Osborn, and his regime.

This Peter Parker wears a suit of Spider-Armour (the Spider-Armour MKI) that he created, which sacrifices agility for protection, as the suit is entirely bullet proof.

This costume famously appeared in two episodes of the 1994 Spider-Man animated series when The Beyonder and Madame Webb summoned several Spider-Men from alternate universes to aid the series’ main Spider-Man in saving reality from the alternate universe villain, Spider-Carnage (a Peter Parker who bonded with the Carnage symbiote and went insane).

Who Is On The Across The Spider-Verse Poster? FAQ

Will Spider-Man Noir be in across the Spider-verse?

Across the Spider-Verse producer, Christopher Miller (22 Jump Street, The Lego Batman Movie, America: The Motion Picture), has confirmed that Spider-Man Noir (Nicholas Cage) will indeed return as a character in the movie.

What does 42 mean in into the Spiderverse?

Robinson, who played for the Brooklyn Dodgers, was the first black man to play in the MLB (Major League Baseball), and is a major and iconic figure in both baseball history and Black American history.

In the Hollywood movie adaptation of Robinson’s life, 42, he was played by none other than Chadwick Boseman, iconic to countless fans worldwide for his performances in the Marvel Cinematic Universe as T’Challa, the Black Panther.